They included scientists from the University of Cambridge’s Sainsbury Laboratory (SLCU) and Department of Plant Sciences, Lancaster University, The Sainsbury Laboratory (TSL) in Norwich and the John Innes Centre. With funding from Gatsby Charitable Foundation, the Bill & Melinda Gates Foundation and the Department for International Development (DFID), these scientists are developing innovations that will increase productivity and empower farmers across sub-Saharan Africa and South Asia. 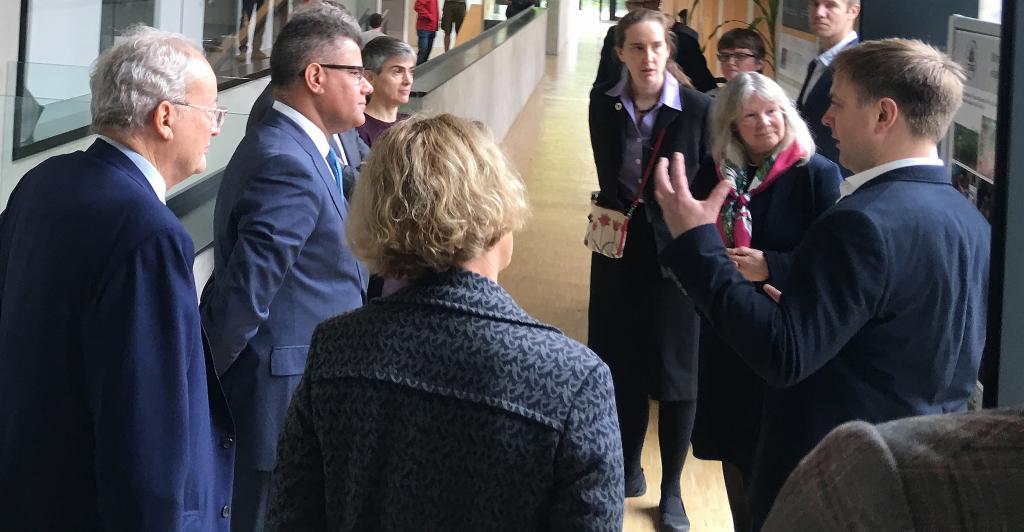 ENSA Scientific Programme Manager, Christian Rogers, provided an overview of how researchers are collaborating on the ENSA, CASS and RIPE projects to the visitors.

They heard from scientists about their latest advances in crop engineering to use biological nitrogen fixation to sustainably increase yields for small-holder farmers in sub-Saharan Africa (ENSA); the RIPE Project that is engineering crops to be more productive by improving photosynthesis; the CASS Project that is engineering metabolic pathways to enhance the yields of root and tuber crops; an in-field kit that diagnoses wheat rust strains in 48-hours (MARPLE) and epidemiological models to predict the spread of plant disease (Epidemiology and Modelling Group).

University of Cambridge Professor and SLCU Group Leader Giles Oldroyd, who coordinates the Engineering Nitrogen Symbiosis for Africa (ENSA) project provided an update on the project’s progress and demonstrated the signalling responses that help plants form symbiotic associations with nitrogen-fixing soil bacteria. Professor Oldroyd said: “We have been working on a programme of research to engineer nitrogen-fixing cereals with support from the Bill & Melinda Gates Foundation for the past six years and are now getting to an exciting stage with a number of discoveries that are getting us closer to achieving this goal. The Gatsby Charitable Foundation, through the SLCU, is supporting us in researching the fundamental understandings of how plants engage with beneficial microorganisms and this is providing us with the foundations on which we can build the engineering programmes in cereal crops.”

As part of their visit, International Development Secretary Alok Sharma announced that DFID would strengthen its ongoing partnership with the Bill & Melinda Gates Foundation, which aims to improve rural livelihoods and create opportunities for people living in the world’s poorest places.

International Development Secretary Alok Sharma said: “We are proud to be working alongside the Bill & Melinda Gates Foundation to tackle some of the most pressing humanitarian issues of our time.

“Feeding a global population of 10 billion by 2050 is a major challenge, particularly with pests and diseases destroying up to 40% of food produced.

“Our joint investment in cutting-edge British research will produce crops that can thrive in conditions caused by climate change. This means people in the developing world will have enough food to eat, British consumers get stable prices, and we can protect our planet by avoiding fertilisers or damaging pesticides.”

The new £38 million of UK aid from DFID will contribute to a portfolio of projects, which will receive additional funding from the Bill & Melinda Gates Foundation.

A plant-fungi partnership at the origin of terrestrial vegetation